One Women Finds Her Future in Construction 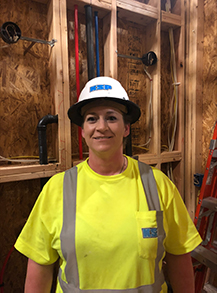 At construction job sites across the country, women only make up one of every 100 workers. Lindsay Fitzgerald, a third-year apprentice with ABC Northern California, is one of those few women building the infrastructure our communities depend on.

While working as a bartender, Lindsay got word of an opportunity to learn a new lasting set of skills while getting paid with benefits. She knew she liked working outdoors and signed up for the apprentice program eager to establish a new stable career to support her daughter as a single mom. “I wanted to build a future for my daughter and myself, one where I could travel anywhere in the country and I would have the training and credentials employers look for,” said Lindsay.

Lindsay wanted to earn a living wage and be at home at night for her child. She knew she needed to set an example of hard work and commitment for her. “I sat down with my 7-year-old and explained that I was about to start a four-year commitment so we could have a future with economic security,” said Lindsay.

In the beginning, Lindsay admits it was a struggle to nail down the basics but she persevered. Once she started the program, Lindsay said she learned how to be resilient on the job site. To other women looking for a fresh start later in life, Lindsay said, “Don’t be nervous about making mistakes, because you’re here to learn and the instructors are here to teach you.”

Now, Lindsay is on track to graduate from the apprenticeship program as a skilled journey-worker with financial wellbeing and stability in a couple of years. “The only regret I have about becoming an apprentice is that I didn't do it sooner.”