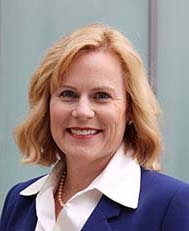 Katie Hagen, appointed by Governor Gavin Newsom on March 6, 2020, is the Director for the California Department of Industrial Relations (DIR).